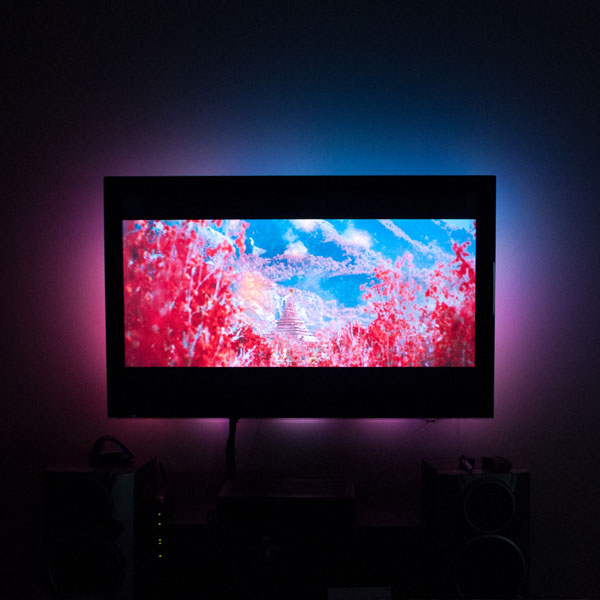 Okay. Lightpack is the greatest thing ever. Here’s the full unboxing, setup, and video demo of Lightpack. I’ll link where you can get your own at the end.

First photo, these are the two lightpacks in their original box: Open up the brown casing and these neat packaging is on the inside: I’m happy to oblige, and I certainly opened it up immediately: And holy cow there’s a lot of stuff!

Ten lights, that are adhesive backed, plus ten more adhesive strips for I guess moving around and screwing up the first time. Had to test it immediately. I was worried one wouldn’t work right off the bat. Plugged it in and configured it to the right and left side of my middle monitor. Half the lights are the perfect shade of blue and half the perfect orange/red: I made Robin open up the second one so she could enjoy the unboxing experience for herself. We’ve both waited so long for this beautiful system: Okay. Down to business. Loosely measured and planned out the lights, and then went to town sticking them everywhere: Did some cable management and test fittings, this is about the cleanest I can get it without some heavy work, and I’m satsified with it: Initially I used the gamma correction of 1.0 (no gamma correction), which I found to be brighter, more vivid, and brilliant lighting. It was right, but I was testing it against movies I had planned out LOOOONG in advance due to bright colors. This was a mistake, gamma correction of 1.0 on normal every day stuff just tended to be overly bright and washed out everywhere. So I jacked it back up to the default of 2.0 after a couple days, and had far better results with normal videos and content. For example, these were all gamma of 1.0:

Some choice captures from Star Trek: Into Darkness: Video of Star Trek: Into Darkness:

Video of the intro to The Avengers:

And for reference, here’s the same video of The Avengers with a gamma correction of 2.0 instead of 1.0, you can decide for yourself which you like better. We’re sticking with 2.0 for now, but may try 1.75 for some stuff. We noticed Battlestar Galactica specifically just didn’t look good at 1.0. It was mostly white with some flickers of color here and there. Jacked up to 2, though, it was PERFECT.

if I get a chance to, I’ll upload a video or some photos of the gamma 2.0 setting instead, which we much prefer now. It’s not as colorful in some respects, but it makes for a much better overall video experience.

You can get your own at http://lightpack.tv/. I got in early, and I ended up paying half of what you have to pay now for a pre order. It was 100% worth it, but for twice the cost you might be a little skittish. I think it’s still worth the money, but that’s easy for me to say as I’m not the one paying (though I might buy more in the near future, we’ll see)