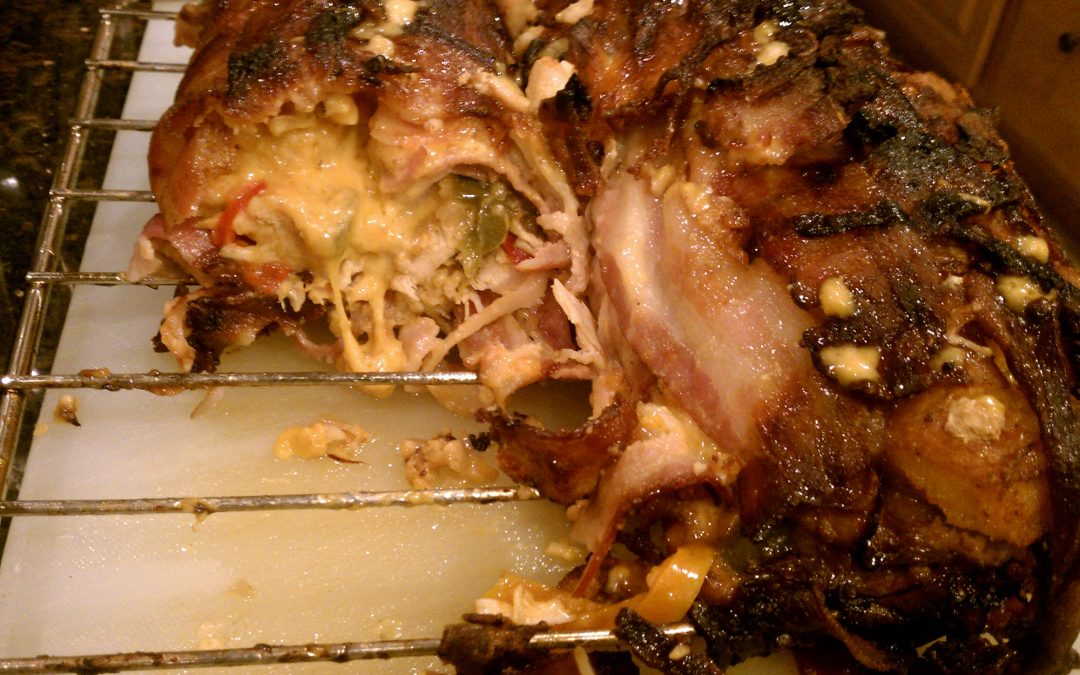 [wdgpo_plusone]
Mmmmmmm, more heart attacks. Who can say no? See my first sausage log here, it inspired this one. I decided that because I’m an American I have a constitutional right to make anything someone else made bigger, better, and in this case cut in half because it was snowing and I didn’t want to grill outside.

I precooked strips of chicken using lemon juice, pepper, and some cilantro and old bay seasoning (my goodness, I love old bay seasoning). I’m posting this now, but I actually did this about a year ago so my memory is a little fuzzy on the details. I think if I were to do it again, I’d precook the chicken only slightly. Perhaps boil it for a bit just to get things started and then do all my seasoning and let it fully cook in the sausage. I was too afraid of getting salmonella so I played it safe and precooked it fully.

I then sauteed lightly some onion with garlic, and peppers with butter (actually, the lovely Robin did this part).

I did create another bacon weave but this one was far bigger. I weaved them in such a way that there was a two strip overlap and used a tiny spread of molasses to get things to stick. Essentially I took two bacon strips and adhered them to eachother with about 2″ of each end, resulting in a bacon strip that instead of crossing 5 weaves would cross 8 weaves.

Unfortunately I didn’t take as many pictures this time as I did the last time (I guess I never expected to post it online when I made it), but I do have some pictures for you.

All spread open ready for rolling! Skip the initial steps. This is the monstrous thing all ready to be assembled.
I actually didn’t cook it the same day I made it, so I rolled it up and wrapped it in some aluminum foil for freezing. here’s what it looked like AFTER coming out of the freezer (when I was freezing it I actually turned it every hour so i didn’t freeze flat)

Ready for cooking! Sadly it had to be cut to fit in my toaster oven. I was too tired/lazy to trek out into the snow to smoke it properly.

Ready for cooking! View from the other side
Toss it in the toaster oven, I forget how long but I think it was around 20 minutes at 400, 10 minutes at 300, and 10 minutes at 200. It was something goofy like that.