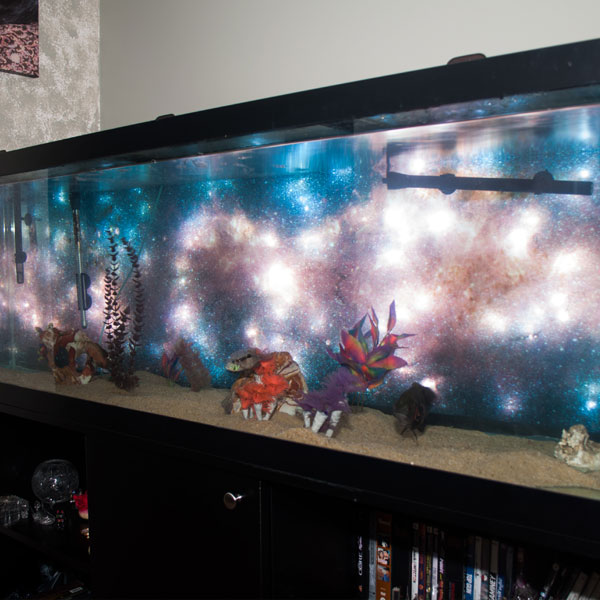 So, my dad got a new 135 gallon fish tank, and he bought a repeating pattern backing that was really bland and boring. I floated the idea of letting me do something really special for him, and he immediately said yes, before even hearing most of the idea.

It came out quite well, not as well as I think I’d like, but for around $100, it came out AMAZING.

This is the image we wanted to use, it came from the Spitzer Space Telescope (Mission) and basically, it’s a glimpse of the entire Milky Way. It looks incredibly vivid thanks to the infrared eyes of the telescope capture, and you can read more about the image and get the full size hundred something megapixel image here: http://photojournal.jpl.nasa.gov/catalog/PIA03239

As almost always, my first step was 3-d modeling it. Okay, looks good! So we got started on the process. I was helped immensely by Jeff Frankle over at Duggal Visual Solutions (www.duggal.com) and we got the space backdrop printed. He printed it with no white ink, and on a matte translucent background, this would allow the light to pass through the star points. Because there was no white ink, a lot of the brighter colors are semi translucent. Why all the trouble? Backlighting, of course :). Anyone that knows me knows well and good how I feel about lighting.

But first, some construction for the backboard. I’ll skip the majority of the build photos, here’s the backing: We got a bunch of LED christmas light strips that had circuits built in to do a “twinkle” effect. I opened up all the circuits and soldered out the buttons to modify the way they twinkle, and soldered on leads and connected them all to one button. So, one button behind the tank to change all of the light strings at once, so constant lighting, slow fade, whatever, was a little easier to work with. If I were doing it again, I would have dropped all pretense of using these circuits and written a program on an arduino and done it myself by hand. This ended up being more problematic than I’d have liked, but it works now. Robin’s help during the process of gluing and all was indescribable. I would not have done it without her, she has far, far more patience than I do.

Additionally, she managed to stick the entire thing on the fish tank completely bubble free. Yeah, I helped, but it would have been a disgusting monster had she not led this piece of the project: Backing is on the tank! the LEDs had a lot of hot spots, so we used three layers of vellum to diffuse the lighting. One day I may go back and redo this, two layers was not enough to diffuse the lighting as much as I’d have liked. I should have used on the scale of 4-6 layers, with spacing in between. I think if I were to do it again, I’d use smaller vellum pieces and stick them right onto the lights, and then another layer over the entirety of the lights, and another 2 layers over the entirety of the back board. That would give some mild amount of spacing between the sheets and would have gotten the light to diffuse better. Also, Andrew showed up and helped some 🙂 Okay, so what does it look like all together?

Photos don’t capture it as well as in-person does, but I’ll do my best, here’s an untouched photo: And here’s a large version, that’s been touched up. This is probably the most life-like capture of what it looks like in person: