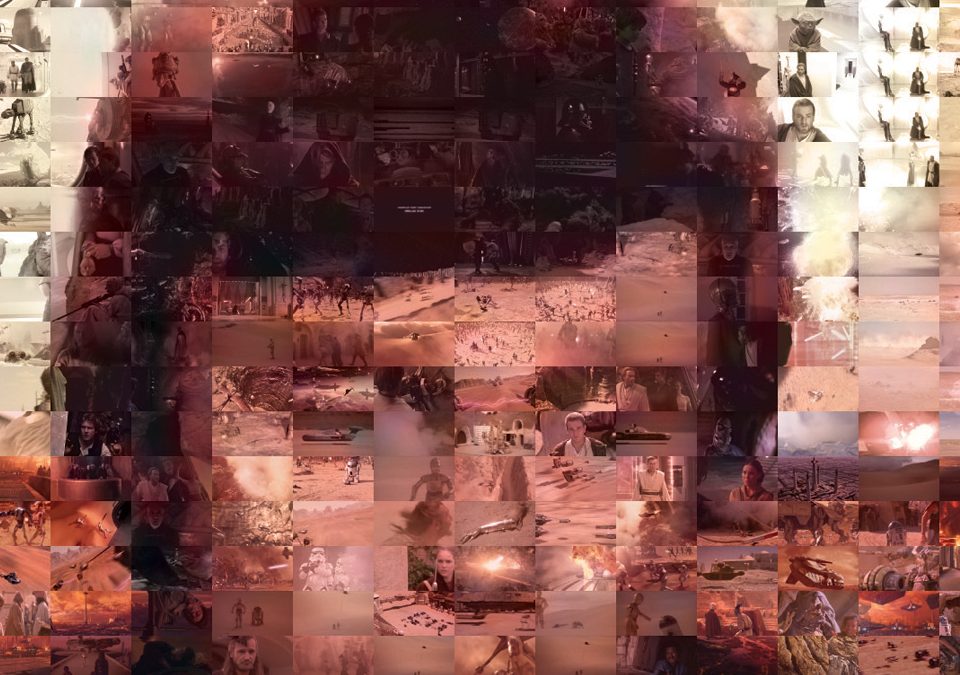 Thanks to Gizmodo.com for the wonderful interview and write up!

VERY special thanks to Eric Deschamps. If you don’t know who he is, he’s not my roommate, he’s the gentleman who painted the original Star Wars Last Supper

More special thanks at the end

It took me about two weeks of programming my own algorithm, doing a shit ton of touching up, and I even replaced a lot of images myself.

two weeks of my roommate saying “turn off your fucking monitor it’s so bright” at 5AM.

Whole shabang from the left

For reference, the table is 10 feet long.

here are some close ups:

Man that glare is annoying!

As much detail as the crappy camera at the time could do.

since it’s all photographs, it’s hard to discern the true detail without seeing it. Here’s a crop from the original 12 gigabyte raw image:

This is not actually not a fullsize crop from the original, but does show a significant amount more detail

and here’s a shrunken down composite of the full size image, you can’t see any details really but you can see what it is at least.

A relatively low resolution version of the image.

I hope you all like it, if you’re interested in purchasing one e-mail me and when I figure out a way to sell it, i’ll let you know. I have no idea on the price, but it cost me 87 to produce one for myself. I’m now looking into obtaining the proper licenses to further pursue this. I wouldn’t really expect it any time soon though, if at all.

Please leave words of encouragement or criticisms if you have any, I’m just getting back into artwork and stuff, so anything is appreciated. I’ll let you know when my next piece is done.
btw, Star Wars > *
Oh, and also, every single image from the mosaic is extracted from all six of the movies, the total collection is approximately 69 thousand images, or about 1 every 20 frames in the entire series.

here’s a short description of how I did it:

yeah, there are mosaic maker programs out there, and that’s how I started. I used a program that does it for you, didn’t like the way it was turning out, and couldn’t process large files. I “hacked” the program and wrote in my own algorithm, which is a slightly modified version of theirs and requires a really…REALLY powerful computer to compute. since mine’s just above average it took a long time for the initial composition. Then about 6 compositions later I started working on it manually. By rough estimation, i’d say I replaced about 1200-1500 images manually (cut/crop, etc.) and it improved the image DRASTICALLY. For this reason there are likely to be doubles, but I tried to avoid it.

I also did a lot of color touching up, I made some frames black and white instead of color because I thought it fit better (like on the table, which is supposed to be all white, but there are only so many hoth scenes). I had the most trouble with the windows in the back, but I just did a lot of color editing and subtle changes to pull it all together. It was a really long project, and I couldn’t do anything while working on it because it was such a gigantic file, my computer would crash if I tried opening winamp or something. The flattened raw file for the full size image is 2 GB. I’m still not entirely satisfied, because I couldn’t get it printed how I wanted. I was shooting for a 5ftx11ft mural, but the printer’s computer couldn’t open a file that large, so in the end everything got shrunk a tad. Also cropped about 6 inches off the sides. I didn’t get grommets put in on the first one, and now i’m regretting it…how the fuck do I hang up a 6 foot long 3 pound poster???

Thanks to slashfilm.com for writing about my mosaic!

These guys helped get the word out too:

Special thanks to everyone who’s written to me with compliments and well wishes. I appreciate this all very much, and it’s almost overwhelming. I can’t tell you how good this makes me feels to know that you all like my mosaic, I wanted to thank you all specially, and I’ll be writing to those of you who e-mailed me individually!