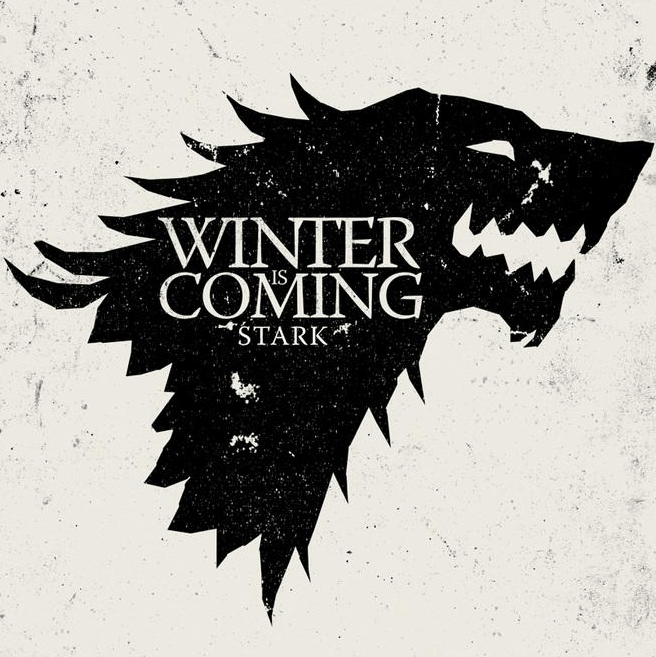 Song of Ice and Fire! WHOOHOO!!

So, if you know me well, or follow my blog like crazy (and I know you do!) you know I have a Chevrolet Impala. I’ve nicknamed my car Tyrion, after all my car is an Impala. Originally, I was toying with the idea of some Tyrion heavy vinyl work on the hood, and I’m not giving up on it yet but I’ve decided to go with a whole Game of Thrones/Song of Ice and Fire theme on my car. Enter part one, “Winter is Coming…”
Here’s a teaser, hit the link for all the pictures.
[singlepic id=40 w=400 h=300 float=center]

So, I found a font, Frutiger CE 95 Ultra Black, that was relatively similar to the chrome letters I picked up at Autozone/Pep Boys (had to go to three stores total to get all the letters…they don’t keep a large stock of them, or a variety of them either). I used the auto kerning on that, jacked up about 1100 points to get a starting point for the spacing. With an excellent typographer friend’s help, I adjusted it a little here and there (primarily the NTE in winter and the CO in coming) and got it looking about right. I knew the delicate touches wouldn’t matter match as the letters aren’t an exact fit anyway, but I have to try. So, I measured out the letters to get an approximate font size and I measured out the back of my car where I’m putting it (roughly 44″). Initially I thought of putting the text just to the right, but when I sized it out, it would have extended past the halfway point and it looked awkward from my guesstimations, so I scrapped that idea. The spread out text looks a little more Stark-ish to me anyhow. Sort of aloof, foreboding even. If I were to define the phrase in two words, it would probably be “Aloof” and “Foreboding,” so that was clearly the ticket for me.


So I put all the letters on the template and got a real feel for the look of it all.[nggtags gallery=winteriscomingone]
[singlepic id=56 w=100 h=75 float=left]Then I had to proceed with the car. Using some floss, rough sponge, and a putty knife I debadged the back portion I planned on sticking this to. After that, I went at it with some rubbing compound and polishing compound to ensure it really gets a solid plant on the adhesive.
[singlepic id=48 w=100 h=75 float=right]Once I was all ready, I used a large piece of painters tape the bring the letters with the proper spacing over to the project area, and stuck it on. I also had to find the center of my trunk, relatively easy to do.
[singlepic id=49 w=100 h=75 float=left]Here’s another shot of the letters. After I stuck the tape down, I pressed firmly on each of the letters. In retrospect I could have used wax paper to prevent it from sticking to the paper but honestly it wasn’t difficult to separate and I didn’t have any letters fall off causing panic.
[singlepic id=50 w=100 h=75 float=right]Once I did all that, I stuck it mostly where I wanted it. Again, this templating is primarily for kerning so it doesn’t look crappy at the end. I actually cut the tape (read: ripped using a zig zag-ish shape to make it easier to line up) because it was so big. Honestly, putting it on as a whole was surprisingly easy, no snafus or falling letters at all. I was pleasantly surprised.
[singlepic id=55 w=100 h=75 float=left]After that it was just peeling back the tape to reveal one letter at a time. I used a piece of scrap tape to mark where the letter was, then removed it from the template/car and peeled the adhesive backing and replacing it where I left my mark. Obviously a lot of room for error, I tried to be as precise as possible but I definitely screwed up on the W right away. I persevered, and said I’ll fix it later, the letters are only $1 each and that’s assuming I can’t just re-adhere it myself. Breaks were definitely key, because your knees getting sore lead to mistakes. Measure twice, stick once. I’m happy with how it turned out.
[singlepic id=52 w=100 h=75 float=right]And in case anyone is going to try something similar I have a big warning. The dots are frickin impossible to peel the adhesive backing off of. Most definitely make sure you have some good 3M double sided to replace the crappy one it comes with. I was fortunate to have it on hand, and I’m glad for that. Would have been kind of saddening otherwise. I had to take an extra long break before I could finish the dots for just that reason.